One of the first roads to be built by the young Texas republic came through prairies and Cross Timbers of northern Texas, passing through today’s Midlothian. The military road crossed the Trinity River near Cedar Springs (inside the city limits of present-day Dallas) and followed the high ground that passes through present-day Cockrell Hill, Duncanville, Cedar Hill, and Midlothian to eventually join the original route, located near the Hill County town of Abbott. This road played a significant role in the history of Texas as the route for emigrants and goods, and as the first cattle trail in the Southwest - the Shawnee Trail. 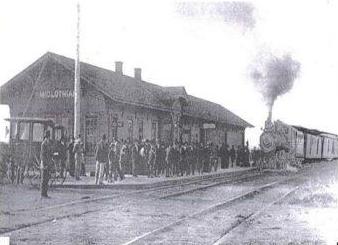 The arrival of the railroad played a major role in the growth of Midlothian. In 1875, the Chicago, Texas, and Mexican Central encouraged settlers in Dallas, Ellis, and Johnson Counties to pressure their elected officials to obtain right-of-way so a rail line could be built from Dallas through northwestern Ellis County and on to Cleburne. By the summer of 1881, the Gulf, Colorado & Santa Fe Railroad started work on the right-of-way and roadbed and came through what would be Midlothian in late 1882.

The Chicago, Texas, and Mexican Central sold the railroad line to the Gulf, Colorado, and Santa Fe Railroad Company in 1882. Building of the Santa Fe Depot soon began and was dedicated on May 10, 1883, the date of the sale of lots in Midlothian by the railroad.  Over time the original depot was replaced with a newer facility, which has been relocated to 5th Street next to the railroad tracks.

On July 1, 1886 the Fort Worth and New Orleans Railway (FWNO), later know as Houston and Texas Central, reached Midlothian. The railroad was being built to connect with the Central Texas and Northwestern Railway in Waxahachie. The FWNO reached Waxahachie on July 29, 1886.

Two regional highways cross at Midlothian. US 67 starts in Sabula, Iowa, and runs south to Presidio, Texas, on the United States and Mexico border. In 1926, when the highway was originally commissioned, the roadway ran from Fredericktown, Missouri, to Dallas.

US 287 was first commissioned in 1935 and only extended from the south entrance of Yellowstone National Park to Denver, Colorado. By 1940, the highway was extended south to the Texas Gulf Coast in Port Arthur, and in 1965 the roadway was continued into Choteau, Montana.