Midlothian Prior to World War II

A Center for Business and the Entrepreneurial Spirit


Early on Midlothian’s unique entrepreneurial spirit and business acumen was realized by one of its early settlers. The community’s most noted entrepreneur was Argyle William Tucker. Besides running a photo studio with his brother after the Civil War, Argyle Tucker spent many of his days as an inventor. He accounted for eleven United States patents with several of his inventions in the halls of the Smithsonian Institution in our nation’s capital. 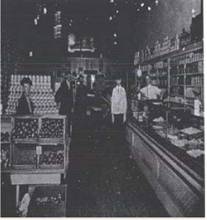 In Midlothian’s early years and the years leading up to World War II commerce and industry tended to be those businesses serving the inhabitants of Midlothian and surrounding communities. The commerce and industry of early Midlothian included those business establishments which served what was still a farming community - the blacksmith and wagon repair shop, the saddle and harness shop, the general stores, drug store, and the hardware and farm implement shop. Midlothian would boast having two cotton gins by 1892 and three banking institutions by 1900.

Midlothian’s greatest asset was that it existed at the crossroads of two railroad lines and eventually two regional highways. At the turn of the twentieth century several manufacturing companies located facilities in Midlothian. This industrial growth was spurred by the development of the automobile and access to rail lines. These companies included The Twentieth Century Tire Protector Company, The Autocrat Tire Company, and The National Rubber Filler Company.

An expanding regional market allowed a few Midlothian-owned companies to supply a broader market. These included the Loisart Manufacturing Plant - which began by selling hand-painted handkerchiefs, then kapok to stuff the pillows that the handkerchiefs decorated, to finally, kapok mattresses during World War II; the Dunlap Theatre Seating Company, and the Corsicana Poultry & Egg Company. However, even the wealth realized through expanded markets could not shelter Midlothian or Ellis County from the Great Depression. Between 1930 and 1940 unemployment in the County more than doubled to 16 percent, prior to the onset of World War II.